This post was originally published on June 24th, 2013. It has been slightly edited and updated for your edification and enjoyment.

Fans of the late John Lennon might bristle at my adulteration of the title of a famous song by the iconic musician and peace activist, but a "nursing class hero" is certainly something to be. 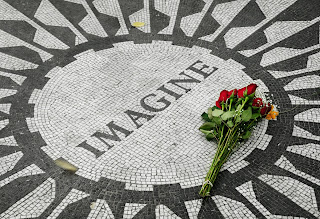 Listening to Lennon's "Working Class Hero", I realized that, aside from being a great play on words, "Nursing Class Hero" could also be a fitting and interesting way to explore our profession from a novel perspective.

Back in the day, nursing was a non-professional, relatively unskilled form of labor wherein nurses were at the beck and call of all-powerful physicians.

Over a long period of time, the nursing profession lacked any quantifiable scientific data or practices that verifiably documented our contributions, thus we were relegated to a working class existence without significant recognition, remuneration or respect (the "Three R's" which I have identified).

Despite the fact that Florence Nightingale is credited by many scholars with essentially inventing the notion of public health (even though she reportedly did not not readily embrace the germ theory), nursing remained in the background of healthcare for decades.

During the 20th century, nursing was often considered a "pink collar" job, meaning that it was generally a profession/vocation pursued mostly by women (and men who couldn't manage to become doctors because they were too poor, too weak, or otherwise unmotivated by power, money, and status). Teachers were generally labeled "pink collar", as well as food service workers, maids, childcare providers, secretaries, flight attendants, and others. You get the picture.

Thus, the "profession" of nursing was diminished in the eyes of the patriarchal power brokers as a woman's vocation with limited value and importance.

I'm certainly no scholar of the history of nursing, but I surmise that the late 20th century (and early 21st century) saw clear demonstrations that nursing belongs in the ranks of professions that are seen as crucial, important, and deserving of increased pay, status, and recognition.

Perhaps it was the rise of nursing scholarship and research that paved the way. Perhaps it was the notion that nursing is actually based on a scientific body of knowledge wholly separate from, but related to, medical knowledge (born of the aforementioned nursing research and scholarship). Perhaps it was because nurses began to value themselves and demand respect and recognition for their individual and collective contribution to the health and well-being of the nation and the world.

Moreover, maybe it was the fact that nurses had moved beyond hospital-based diploma programs, wholeheartedly embracing academia, with nurses earning associate degrees, baccalaureate degrees, and even masters and doctoral degrees. And perhaps it was just a combination--a "perfect storm"--of factors that tipped the scales in our favor.

As I love to mention over and over again (am I gloating?), nurses continue to claim the status of being the most trusted professionals in the United States. At any party or gathering, say you're a nurse and you automatically gain the trust and gratitude of many people who express their love of nurses (and the occasional story of a "nurse angel" who lives in their memory).

As a nurse, you also gain the distinction of being the go-to person in your neighborhood or family for advice, questions and medical counsel (for better or worse).

Despite the popular characters of Nurse Ratched, Nurse Jackie and others who taint the profession in various ways, the general public still holds us in overall high esteem, and declaring your "nurseness" has many benefits (but apparently no regular discounts at the movies, the airline ticket counter, or other places where it counts).

Let's Ditch the Collar, Shall We?

Blue collar, white collar, pink collar, green collar, ring around the collar--what does it all mean, anyway? Is it even relevant anymore? These artificial designations are a way for those in positions of power to categorize us for their own ends; we don't have to accept their categories any more than we need to accept their erroneous and misguided beliefs in their own significance.

Nurses have power. Nurses are powerful. Nurses wield knowledge, compassion, skill, insight, and the depth and breadth of their knowledge.

I say on this blog over and over again (ad nauseum, you say?) that, as nurses, we are both the backbone and the connective tissue of the healthcare industry, and that isn't going to change any time soon.

In fact, as the population ages and nurses become even more indispensable in the promotion of healthy lifestyles and preventive wellness practices, our ability to impact the health of the nation (and world) will increase exponentially.

As doctors continue to leave primary care in pursuit of the salaries and status of specialization, it is nurses (many prepared with masters and doctoral degrees) who continue to fill the gap by caring for those in need of solid, scientific, and compassionate primary care. Nurse practitioners are seeing expanding autonomy and 31% projected job growth through 2024, and that is a testament to their importance. Nursing's day has come.

I don't think John Lennon would mind my borrowing his song title (and the spirit of that powerful ditty) to supply a play on words that underscores the importance and power of nurses. In fact, I bet he'd proudly walk in picket lines with union nurses demanding equal pay, improved working conditions, and safer patient care.

Yes, I can indeed say that a "nursing class hero" is something to be.

A widely published nurse writer, Keith is the author of "Savvy Networking For Nurses: Getting Connected and Staying Connected in the 21st Century," and has contributed chapters to a number of books related to the  nursing profession. Keith has written for Nurse.com, Nurse.org, MultiViews News Service, LPNtoBSNOnline, StaffGarden, AusMed, American Sentinel University, the ANA blog, Working Nurse Magazine, and other online publications.