Nurses, George Floyd, Racial Disparities, and the World We'd Like to See

At this unsettling time in the United States and around the world, racism is being confronted head-on by citizens who've simply had enough of the status quo. The knowledge of deep racial disparities in healthcare are nothing new, and the understanding that people of color are treated more poorly within the American healthcare system is also an old story that never seems to change.

But now, amidst the  COVID-19 pandemic and rampant global fear, economic insecurity, and a population tired of lip service to diversity and inclusion, millions are saying, "No more to endemic racism and police brutality against people of color!"

We nurses are part of the conversation because we're citizens, voters, and those who deliver care, conduct research, and perform myriad other tasks related to public health, acute care, hospice, home health, and beyond. Is our profession up to the task of confronting racism and other societal ills more boldly than ever before? 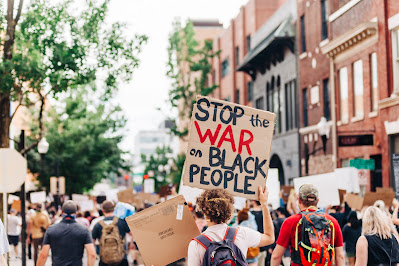 The United States was founded on a racist premise that the slaves who were brought from Africa were less than human (3/5 human was, I believe, the declaration), and many of the so-called "Founding Fathers" owned slaves, including Thomas Jefferson. Patriarchy, misogyny, and the iron-fisted rule of white men created the misaligned and imbalanced country we live in today, and even women have only had the right to vote since August of 1920, a little more than 100 years ago at the time of this writing.

In nursing, a patriarchal medical system created by white men kept women in a subservient place for many decades, and not that many years ago nurses would stand up when a doctor entered the room and offer her chair. Seen as no more than handmaidens to all-powerful doctors, nurses had to fight for their sense of professional agency and autonomy, and even now some physician groups continue to strive to roll back gains made by both registered nurses and advanced practice nurses like midwives and nurse practitioners.

We know that healthcare outcomes are significantly worse for all people of color, and we also know that African Americans, even though they comprise approximately 14 percent of the American population, are carrying a vastly larger "viral burden" of the COVID-19 pandemic. In Indianapolis, Indiana, 646 of every 100,000 African Americans have been infected with COVID-19, and in comparison only 345 of every 100,000 Caucasians have been infected. The social determinants of health work against African Americans and other people of color in the United States, and this vast chasm of inequity must be overcome with sustained effort and outspoken criticism of the way things are.

The Kaiser Family Foundation has said it very well:

“Health disparities, including disparities related to COVID-19, are symptoms of broader underlying social and economic inequities that reflect structural and systemic barriers and biases across sectors. Though health care is essential to health, it is a relatively weak health determinant. Research shows that social determinants of health—the conditions in which people are born, grow, live, work and age—are primary drivers of health. They include factors like socioeconomic status, education, neighborhood and physical environment, employment, and social support networks, as well as access to health care (Figure 2). For example, children born to parents who have not completed high school are more likely to live in an environment that poses barriers to health such as lack of safety, exposed garbage, and substandard housing. They also are less likely to have access to sidewalks, parks or playgrounds, recreation centers, or a library. Further, evidence shows that stress negatively affects health across the lifespan and that environmental factors may have multi-generational impacts.”

And when it comes to police brutality against people of color, all bets are off in terms of just how bad it has become when "living while black" carries with it threats of discrimination, violence, and death, let alone working while black, driving while black, shopping while black, and other independent activities of daily living that the privileged (admittedly, myself, as well) enjoy without even thinking how privileged we truly are. 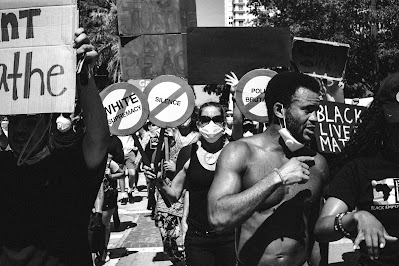 The Police are Rioting Too

News reports show police officers around the United States confronting mostly masked demonstrators without wearing masks themselves. Police are also using pepper spray, tear gas, and other lung irritants to subdue demonstrators, which in and of itself is an egregious and ill-advised crowd-control practice during a pandemic obviously spread by respiratory droplets. Preliminary reports from the protests around the country already show that COVID-19 infections are spreading among protesters. Are the unmasked police and their tactics solely to blame? Not at all; there are countless protesters foregoing masks as well, and the sheer number of people in close proximity -- yelling and breathing and coughing -- is more than enough to help the contagion spread.

Power is often a corrupting force, and we can witness that from the newly-appointed Charge Nurse who suddenly becomes a dictator and bully to his or her colleagues who she mistreats. We also see it in the police officer who swings a baton to crack the skull of a peaceful protester, a belligerent President who uses words as weapons, and the child who learns from witnessing such behavior that mistreatment of others in the interest of the self isn't necessarily looked down upon in American culture.

In this age of the smart phone, an overwhelming number of citizen-filmed video is capturing the story of African Americans dying at the hands of the police, as well as military-style police units beating peaceful protesters with billy clubs, shoving older men aside so violently that they suffer life-threatening head injuries, and otherwise instilling fear and further inciting violence and resistance to brutality. In essence, a protest movement spawned from the world witnessing a citizen video of a black man being egregiously and wantonly asphyxiated by a police officer has been met with violence and brutality by the police. This is George Orwell's nightmarish vision come home to roost yet again.

When the video of George Floyd was released in which he was saying "I can't breathe" and calling for his dead mother as he lay dying, something enormous died in that moment here in the United States and around this virus-besieged globe. Mr. Floyd,  asphyxiated under an uncaring officer's knee for almost nine unrelenting minutes, was also watched by other officers who failed to intervene in any way. All four officers have been charged, and the main offender has now had charges against him increased to second-degree murder. May a conviction and prison sentence be forthcoming soon.

Meanwhile, blathering politicians -- including our President and Attorney General William Barr -- proclaim victory over the protests and denial that rampant racism exists within police departments around the country. The tone-deafness is in itself deafening, if not reminiscent of the aforementioned Orwellian nightmare.

If you don't believe that the police themselves are rioting, you haven't been paying attention. In fact, they've been holding a quiet riot for years right under our noses, and it has been directed without cease at African Americans and other people of color.

Nurses, It's Time to Act

As the most trusted professionals in the US year after year in the Gallup Poll, nurses are in a unique position to have the ear of the public. While often absent from the media and not requested to comment on current events, nurses are now on prime time television news and being asked for their reflections on COVID-19 and its impact. Some are also being interviewed for articles about their support of the Black Lives Matter movement sweeping the globe in the wake of Mr. Floyd's tragic death. 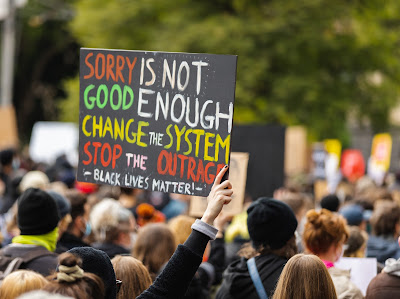 Nurses, we can attend protests, write letters to the editor, send emails to our elected officials, and make appointments to meet with those legislators face to face. We can register to vote, get our friends and colleagues and family members to do the same, and we can even run for office ourselves at the local, state, and even federal level. Several nurses serve in Congress at this time, and perhaps you may be the next one to step into those halls and hold your head high as a registered nurse ready to confront the disparities all around us.

We nurses can use our voices, collectively and individually. We can learn how to lobby for bills we support and agains bills we oppose. We can join our state nursing association and become involved with their government relations committee, and if they don't yet have one, we can establish it from scratch and cajole our colleagues into action.

As a whole, nurses are strong, ethical, honest, trustworthy, hard-working, caring, compassionate, and brilliant in their critical thinking and emotional and relational intelligence. We have the skills to bring to the negotiating table, either in our state legislatures or the boardrooms of our own workplaces.

Stand up, speak out, and always remember that your silence equals complicity. So when it comes to police violence against people of color and protesters; social and healthcare inequities; and other ills keeping our nation in the muck and mire of Old World thinking and misguided action, we need to imagine the new world we want and work together to get there.

Email ThisBlogThis!Share to TwitterShare to FacebookShare to Pinterest
Labels: nurses