As a nurse writer and blogger, I often use metaphor as a way to express deeper ideas about nursing and healthcare. In the past, I've explored the myths of Sisyphus and Hercules as they relate to nurses and the nursing profession, and my nature continues to point me towards metaphor as a tool for understanding.

I've recently been considering the figure of Don Quixote as another metaphor related to our often beleaguered profession; although much has been written about Quixote and the author Miguel Cervantes, I don't believe anything has been written about the potentially quixotic nature of nurses. So, my friends, I give you the notion of "The Quixotic Nurse".

(Note: this post is much longer than my usual 500-600 words. Please bear with me and consider this long-form post as a necessary means to my desired literary end.) 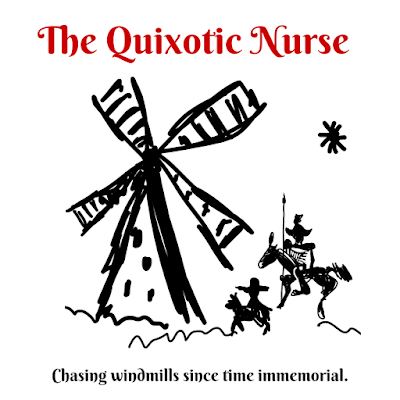 Few of us (myself included) have ever actually read the entire story of Don Quixote, with the majority of us understanding the story from the viewpoint of cultural reference and a lackadaisical reading of Cliff Notes during a sleepy high school English class. If we've encountered the story, we probably know little, but we readily understand that Quixote was a man who imagined himself to be a chivalrous knight of old, frequently mistaking windmills for monsters in need of vanquishing. His faithful sidekick, Sancho Panza, was a simple peasant farmer who served as his squire, and they wandered the hills of Spain in search of Dulcinea, a woman whom Quixote felt was in need of his knightly services, and who may or may not have existed.

Countless books have been written about Don Quixote and the true meaning of the story and its symbols, and I'm by no means an authority on the subject. But when it comes to nurses and nursing, I can see that some of us may fit a certain model of quixotic behavior, and I'd like to explore that notion here with you, dear Reader.

Although the term "quixotic" (pronounced "kwik-sadik") is often defined as exceedingly idealistic, as well as impractical and unrealistic, I prefer to consider other aspects of the term in relation to certain themes of the Quixote story, especially as it relates to nursing. Chivalry, honor, rebellion against authority, the questioning of the status quo, truth, justice, and varying visions of reality speak to me as apropos of the nursing profession in 2019 and beyond.

The quixotic nurse sees the disempowering of patients as an issue of justice and abuse of authority, and she seeks to alter common practices that undermine patients' personal agency and self-determination.

In my book, the quixotic nurse may view the patriarchal healthcare system as a "windmill" in need of vanquishing, a corporate juggernaut that swallows nurses whole, overcharges patients and health insurance plans for unnecessary care, and otherwise exists as a slow-moving corporate ship that becomes more dysfunctional by the day.

Some may view the quixotic nurse as overly idealistic and unrealistic, a cog in the machine who simply needs to understand the so-called "reality" of healthcare economics, leave the decision-making to others, and do her job without complaining.

However, others acknowledge that it is often the quixotic individuals who make things happen and change the world. Mahatma Gandhi may well have been quixotic in his desire to overthrow British colonialism and bring political autonomy to India; Martin Luther King's vision of racial equality was certainly seen as unrealistic and unachieveable (and some may argue it still is based on recent events); the secession of the new United States of America from the British during the 18th century was seen as foolhardy and doomed to failure; and Mother Teresa's efforts to offer succor and compassion to the poor may have been viewed as a drop in a proverbially overflowing bucket of human suffering.

The visionary are often dismissed as misguided, but if we didn't listen to at least some of them, the world would be a very different place indeed (perhaps devoid of electricity, overrun by communicable disease, and populated by people who believe that the flat earth is the center of the universe). 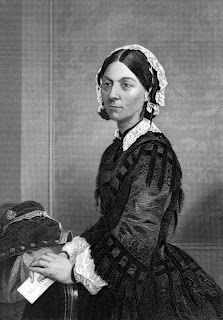 I am not a Nightingale scholar, yet I have deep respect for a woman who challenged the medical establishment and saved countless lives as she instituted (by sheer force of will) simple practices of hygiene and sanitation for the health and safety of her soldier patients.

With so many other accomplishments under her belt, including the revolutionary use of statistics in the scientific assessment of the quality and outcomes of healthcare delivery, Nightingale revolutionized battlefield medical care while simultaneously launching what was destined to be the underpinnings of the modern science of nursing.

I submit that Florence Nightingale was indeed a quixotic nurse revolutionary, and her "windmill"---the poor quality of healthcare delivery on the battlefield, among other ills---was one that she indeed vanquished, ultimately producing change on a gargantuan scale that would span centuries, reaching far into a world that she would never herself know.

There are always fights that seem unwinnable, and some nurses have certainly given up the fight when faced with overwhelming odds and a sense of the inevitability of defeat. And yes, there are sometimes ideas and ideals that are in themselves unrealistic, necessitating a change of course. We can't necessarily right every wrong that we see in the world, and we must of necessity choose our battles carefully. Are you a nurse with a "windmill" in your sights? Is there a bit of Erin Brockovich in you? Do some of your colleagues see you as quixotic in your desire to change something about your workplace or your profession? Have you been shot down as you've tried to initiate a change of practice, or have you slunk into a corner when you've realized the odds you're up against? Have you backed down, despite your values and deep desire for change?

Renee Thompson is a nurse champion who criss-crosses the country, educating nurses and nursing leaders about the scourge of nurse bullying and lateral violence. Some may say that it's a classically quixotic undertaking and a losing battle, reiterating the tired old notion that "it's always been that way," "nurses just eat their young," and "you can't change nurses." But au contraire, Renee tackles this problem one nurse at a time, one facility or unit at a time, and with every nurse bully fired and vanquished, we are one step closer to eradicating (or at least controlling) the misguided mentality that nurses simply bully other nurses and we're powerless to overcome that sad dynamic.

Nurses, what windmill gets under your skin? What do you see in your professional life that you just can't tolerate anymore? Are there behaviors, practices, or beliefs that just have to change? Do your colleagues see change as impossible; do they see your vision as unrealistic and doomed to failure?

We nurses have lives to live, families to feed, children to raise, and loved ones to care for. We have businesses, educational and career goals, and our own self-care to consider. The life of the 21st-century nurse is complex and multifaceted, and we have limits to our energy, attention, and personal resources.

As thoughtful and earnest nurses, we know that there are windmills and monsters that are too big for us to tackle; we see problems and challenges, and we wonder how we can surmount them. We may feel a deeply seated desire for truth and justice in healthcare, but we may also feel powerless to effect change on a large scale. 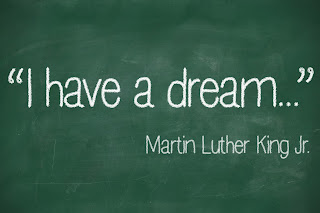 If Martin Luther King had obsessed over the details of how he would change the zeitgeist of racial inequality across the nation, would he have still seen the relative usefulness of such "small" actions as the Selma bus boycott? He may have faltered at times when faced with such brutality and entrenched thinking, yet he maintained a larger vision while staying simultaneously laser focused on the pieces of the puzzle that would feed the fulfillment of that vision.

If you were to choose your battles carefully and focus your attention on the small steps, the little changes, what could you accomplish? If you decided to not worry about how to fulfill the big goal (like permanently eradicating bullying from the nursing profession forever) and instead chose to have one bully removed from your unit (difficult yet attainable), aren't you still moving in the direction of your overarching desire?

Nurses, if you want to change something, consider the small steps that will get you there. If you have your own healthcare windmill that's crying out for you to wage battle on its behalf, imagine what you need to get started. And if colleagues and naysayers tell you that it's not possible, bear in mind the potential consequences of not acting according to your beliefs and values; silence and inaction can often be tools of complicity.

Working in nursing and healthcare is filled with moral and ethical dilemmas, whether in terms of healthcare economics, patients' rights, labor practices, the behavior of healthcare providers, or the quality of care. We are faced with moral questions every day, some of which we feel unable to personally address or assuage.

You may feel that your desire is quixotic in the pejorative sense of the word, negating it as pie-in-the-sky or impossible to bring to fruition. Alternatively, you can also see its quixotic nature as an example of one person willing to stand up against a giant windmill/monster in need of toppling, even as others point out that the process will be long, difficult, and perilous.

Nurses, if you have a dream, step forward and make the first move to bring it into reality; you may be rebuffed, ridiculed, thwarted, and challenged. Pay no mind, and just take that first courageous step.

Florence Nightingale seized the day, changing the course of battlefield medicine and launching the science of nursing practice as we know it today. Her windmill was enormous, and she simultaneously fought against a much more deeply ingrained form of medical and societal patriarchy than the average 21st-century female nurse must now face. How the odds were stacked against an unmarried non-professional woman from Victorian England.

Impractical and idealistic? Maybe. Pie-in-the-sky and impossible? Perhaps. Worth an earnest, heartfelt attempt? By all means.