(Note: this blog post was originally published on LinkedIn.)

In the midst of the coronavirus pandemic, information and misinformation travel like wildfire. Meanwhile, as we individually and collectively struggle with aligning our priorities and making good choices, things get overlooked and left in the dust, including people.

Missteps have been the hallmark of the pandemic here in the United States, especially when it comes to the Trump administration's lackluster and criminally misguided response, denial of reality, rejection of science, and the consistent undermining of expertise.

No matter the administration in power, mistakes and missed opportunities will continue to be made, just not as purposefully and cynically as that of the Trump White House and its spineless Republican lackeys. 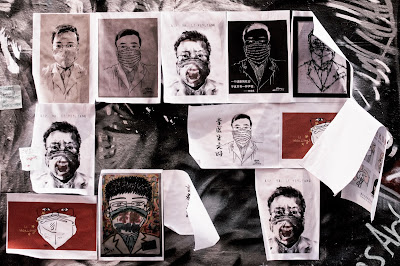 Photo by Adli Wahid on Unsplash.com
While frontline workers walk determinedly headfirst into the pandemic on a daily basis -- just as firefighters rush into burning buildings while the rest of us run in the other direction in our own inherent self-interest -- many are left out of the conversation regarding the best steps to take in the all-out war against SARS-CoV-2.

At the Table or on the Menu?

When President-elect Biden named the new COVID-19 Advisory Board that will be the foundation of his new administration's pandemic response, there were some glaring omissions from the roster, namely anyone who is not a doctor or scientist. While there are indeed people of color and women in this high-level group (a noteworthy step forward), there is obviously no consideration of the voices of other experts who understand patient care, public health, disaster response, and evidence-based medicine.

Nurses make up the largest segment of the healthcare workforce by far. And as the most trusted professionals in the United States year after year, as evidenced in the annual Gallup poll, citizens look to nurses for honesty, integrity, and high-quality care. Nurses are the human bulwark against the pandemic, yet they are often overlooked in terms of their expertise and potential contributions.

There are innumerable nurses with doctoral degrees in public health, healthcare administration, and other crucial specialties, and yet not one was named to Mr. Biden's nascent pandemic advisory board. While doctors are indeed experts in many fields of endeavor, nurses spend exponentially more time caring for patients, and there is much to be gleaned from their keen observations and deep experience. Nurse scientists, researchers, and others also have a great deal to contribute if given a seat at the table; yet, as so often happens, those without a seat at the table end up on the menu.

A petition now circulating on Change.org is calling for at least one nurse to be appointed by Mr. Biden to this advisory body, and a variety of powerful and influential nursing organizations are reaching out to the Biden transition team in order to strengthen the cry for nurses to be included in the conversation.

Nurses have pressured the U.S. government to invoke the Defense Production Act; detailed rampant and unsafe reuse of PPE; reported PPE shortages; and otherwise been the eyes and ears of the pandemic front lines. And at least 1,000 nurses have died of COVID-19, giving their lives for the cause of public safety.

Who else should perhaps have a seat at President-elect Biden's table?

There are others whose presence would also benefit the whole. This list is yet a brief reminder that other experts have something to contribute, whether it's a representative of the environmental service workers who keep our hospitals and facilities clean, or the EMTs and psychologists who respond to the physical or psychological impact of the pandemic.

I have a friend who works in the film industry. She was recently here in Santa Fe, New Mexico for a number of months during the production of a movie. They did not have a closed set, yet the safety of employees was given a high level of priority. To wit, most members of the crew -- especially those on set -- were administered a rapid COVID-19 test three times per week and a PCR test once per week. When outbreaks or scares occurred - which they did - certain aspects of the production were shut down, people were isolated, and everyone was kept as safe as possible.

In the realm of professional sports, many players are tested on a daily basis, raising fears of sports leagues using up precious testing resources. While some citizens concerned about their health wait for hours for COVID tests and are sometimes turned away, athletes enjoy unfettered access to the reassurance of frequent testing. College athletes -- historically seen as an elite group -- receive even better treatment than their student peers, most likely due to the fact that teams bring in dollars while other students are seen as a drain on resources.

In the midst of such apparent disparities and allocation of resources, my nurse friends and colleagues are left to their own devices. A friend who works in a COVID ICU somewhere in the U.S. has never been offered a test by her employer. Another friend who serves in a federally-qualified community health center as an advanced practice registered nurse has also never been tested, nor have her colleagues. And when a potential exposure occurred and an employee was sent home to get tested and quarantine, all other employees were expected to continue to work and not quarantine, even as fears mushroomed regarding the sick coworker. (She eventually tested negative, but results were not known for six anxious days.)

Yard signs praising healthcare workers as heroes are lovely. The banging of pots and pans at 7:00 pm in honor of nurses coming off shift is also thoughtful, although most nurses never hear the banging since they actually don't get out of work until at least 7:30. Coupons for free doughnuts and coffee are also kind, yet for a nurse risking their life every day without respite or the ability to quarantine when potentially exposed, a pastry does little to assuage the fear of bringing the virus home to loved ones, not to mention the threat to one's own health and life.

"Prepare for broad-based viral testing in facilities after known or suspected SARS-CoV-2 exposure or when there is moderate to substantial transmission in the community."

"You will need testing if there is an outbreak in your facility, and repeat testing at regular intervals if your initial test result was negative until the outbreak is over."

"You will need serial testing based on your county percent test positivity rate."

Other news reports reiterate the prudence of such concerns and strategies:

".....All health care workers, and really anyone in a hospital setting like housekeeping or food service workers, should be tested regularly, especially because research has shown that people are spreading the virus before they have symptoms or if they never show symptoms at all." - AZCentral.com

In the U.K., "The Imperial College London COVID-19 response team has modelled a regular testing approach. It suggests that screening staff weekly might reduce their contribution to transmission by 25%-33% on top of other measures, such as health workers self-isolating if they develop symptoms."

The Winter of Our Discontent

As the winter of 2020-2021 sets in here in the northern hemisphere, fears of increasing infection rates permeate society, except for those delusional individuals who believe that the virus is a left-wing media/global progressive elite cabal conspiracy aimed at preventing Donald Trump from winning a second term in office (See? It worked -- but don't tell anyone.)

Our first pandemic winter and holiday season are now upon us. The winter of our discontent is truly here. Even as President-elect Joe Biden and Vice President-elect Kamala Harris prepare to take office on January 20th, they are hobbled at every turn by a political system that refuses to recognize their free and fair election to the highest offices in the land. They are also left out of crucial pandemic response planning for the two months ahead, thus putting them even more behind the eight-ball as they assume responsibility for our national response at 12:00 pm eastern time on January 20th.

Our fractured politics, misaligned priorities, misplaced anger, and the myriad missed opportunities afloat in the general zeitgeist of American society -- and the world at large -- spell danger to those who are paying attention. We need a collective course correction now; actually, we needed it yesterday. And if we don't pull ourselves together and do what needs to be done with rightfully aligned priorities and clear agreement on the path forward, history will indeed judge us harshly for our missteps and miscalculations. In fact, those harsh judgments are already a foregone conclusion.

Are we ready to talk? And if not, whatever are we waiting for?

Keith Carlson, RN, BSN, NC-BC, is a Board Certified Nurse Coach offering holistic career development for nurses and healthcare professionals. All things Nurse Keith can be found at NurseKeith.com.
Keith is the host of The Nurse Keith Show, his solo podcast focused on career advice and inspiration for nurses. From 2012 until its sunset in 2017, Keith co-hosted RNFMRadio, a groundbreaking nursing podcast.
A widely published nurse writer, Keith is the author of Savvy Networking For Nurses: Getting Connected and Staying Connected in the 21st Century and Aspire to be Inspired: Creating a Nursing Career That Matters. He has contributed chapters to a number of books related to the  nursing profession. Keith has written for Nurse.com, Nurse.org, MultiBriefs News Service, LPNtoBSNOnline, StaffGarden, AusMed, American Sentinel University, BlackDoctor.org, Diabetes Lifestyle, the ANA blog, NursingCE.com, American Nurse Today, Working Nurse Magazine, and other online and print publications.
Mr. Carlson brings a plethora of experience as a nurse thought leader, keynote speaker, online nurse personality, social media influencer, podcaster, holistic career coach, writer, and well-known nurse entrepreneur. He lives in Santa Fe, New Mexico with his adorable and remarkably intelligent cat, George. You can follow George the Cat on Instagram using the hashtag, #georgethecatsantafe.
Posted by Keith "Nurse Keith" Carlson, RN, BSN, NC-BC at 11/16/2020 11:28:00 AM