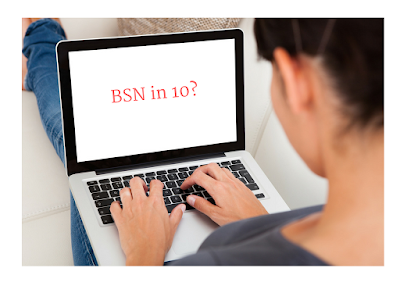 As most of us are already aware, the Institute of Medicine's Future of Nursing Report called for 80% of nurses to be Bachelor's-prepared by 2020. Multiple studies have demonstrated that infection rates and patient mortality decrease when the percentage of Bachelors-prepared nurses on any given unit is increased. While many argue that these findings are less than conclusive, they are used as an ongoing argument for an exponential increase in the number of BSN nurses being educated, sought after, and hired. In fact, for better or worse, many Magnet and non-Magnet hospitals no longer hire nurses with associate degrees.

In light of the IOM's ongoing partnerships with the Robert Wood Johnson Foundation and the AARP, as well as the full backing of the American Nurses Association for such initiatives, it was inevitable that one state would lead the way sooner than later in terms of mandating the BSN.

Many of us are unaware of the fact that the ANA recommended a BSN as the entry-level degree for nurses back in 1964. The ongoing conversation has been decades long, and we can now see that the controversy is alive and well in 2018.

There are just short of 300,000 nurses in NY State, and since there are only approximately 3.2 million nurses in the entire country, this decision by Governor Cuomo impacts almost 10% of the profession.

In terms of the details of the legislation, I've so far been able to glean the following:

1) A NY State commission has been formed to assess existing barriers to a baccalaureate education currently being experienced by those desiring entry into the nursing profession, as well as licensed nurses wishing to further their education. The commission has 12 months to submit its findings to the Governor.

2) RNs with up-to-date NY State licenses (including those living outside the state and not currently practicing), as well as those students enrolled in ADN nursing programs (or currently on waiting lists for nursing school), shall be grandfathered in without having to meet the BSN in 10 requirement.

3) With the exception of those already in school or those currently awaiting acceptance to a program, all nurses earning an associate's degree anywhere in the country who wish to work in NY State must earn a BSN within 10 years of their initial nursing licensure date in their original state of domicile.

4) If a nurse does not earn his or her BSN within the required 10-year period, their license will apparently be put on hold until they do so. Nurses can also apply for an extension for personal circumstances beyond their control.

As of this writing, there are more than 175 comments on a Nurse.com article about this subject, and opinions are certainly mixed. My related post on the Nurse Keith Coaching Facebook page shows an equal division of opinion on the matter.

The American Association of Colleges of Nursing (AACN) have come out strongly in favor of the BSN being the entry-level degree for nursing practice. In their draft statement entitled, "The Baccalaureate Degree as Entry-Level Preparation for Nursing Practice," the AACN stated the following: "The American Association of Colleges of Nursing strongly believes that registered nurses should be minimally prepared with the Bachelor of Science in Nursing (BSN) or equivalent nursing degree." Public comments on this draft statement were due by December 20, 2017. A vote will be held in March of 2018 to determine if the organization will fully accept the final draft for adoption and publication.

We can only imagine that the reactions of nurses and nursing students in NY State are equally divided in reaction to the new legislation. And with this sea change in New York, other states will certainly be following suit.

The reactions of other professionals will still need to be measured over time. We are aware that, in many clinical situations, the nurse on the team is often the least educated. Physical therapists, speech language pathologists, occupational therapists, and social workers generally all have master's degrees. New physical therapists are now required to have a PhD, an initiative apparently largely driven by a desire for PTs to earn more professional respect and standing, practice autonomously, and be on par with MDs in terms of their level of education. The nursing equivalent of such a movement would be the DNP terminal degree.

The reverberations of the NY State legislation will need to be measured in years, not weeks or months. Nurses and organizations within New York's borders will be the first to feel the impact, and only time will tell how what effects this will have on nursing shortages, nursing school application and admission rates, and other challenges within The Empire State.

Outside of New York, we can assume that state legislatures and governors around the country have watched the NY State decision closely, and other states will certainly be moving to enact their own educational requirements for nurses. We can't predict the level of resistance or support that will be faced in other states, but one can imagine that the divisions within the nursing and education fields will be as intense as they were in New York.

For nurses with ADNs, I've opined for several years that the number of available jobs will be slowly decreasing over time as the BSN becomes the de facto entry level degree for nursing practice. Even without legislation, we know that many hospitals have already chosen to favor BSNs, no matter how up in arms nurses may feel about that fact.

For those initially entering the profession, not earning a BSN definitely decreases the pool of potential jobs, especially in highly competitive urban markets where acute care positions are sought. ADNs can still find positions in long term care and other types of facilities, but the window has been closing for a while, and I believe it will continue to narrow.

We can also argue that, as more nurses earn a bachelor's degree, a certain percentage will be inspired to continue their studies and earn advanced nursing degrees. A growing number of masters- and doctorally-prepared nurses can only enhance the overall standing and influence of the profession.

On my Facebook page, nurses have openly discussed the hostility visited upon BSNs by ADNs and LPNs; the need to differentiate between Basic Technical Nurses (BTNs) and those with more education; as well as some opinions that, in the face of a looming nursing shortage, New York may eventually revoke such "ivory tower" legislation divorced from the overwhelming reality of healthcare in the 21st century.

I personally have mixed feelings about the government legislating educational requirements for anyone, but I also appreciate the data that shows the presence of BSN-prepared nurses leading to decreased morbidity and mortality. In terms of my ongoing advice to those wishing to enter our noble profession, I'll continue to advocate for my clients to seek a BSN in light of the larger breadth of opportunities available for those nurses with a bachelor's degree.

This conversation is not over by any means, and smart nurses all over the country will no doubt have a great deal to say on both sides of this timely debate.

A widely published nurse writer, Keith is the author of Savvy Networking For Nurses: Getting Connected and Staying Connected in the 21st Century and Aspire to be Inspired: Creating a Nursing Career That Matters. He has contributed chapters to a number of books related to the  nursing profession. Keith has written for Nurse.com, Nurse.org, MultiViews News Service, LPNtoBSNOnline, StaffGarden, AusMed, American Sentinel University, the ANA blog, NursingCE.com, American Nurse Today, Working Nurse Magazine, and other online and print publications.