The mass shooting at the Pulse Nightclub in Orlando, Florida on June 12th, 2016 was a stark reminder that we are still struggling with issues related to violence, hatred, guns, homophobia, and the potential for terrorism in the United States. As nurses, we bear a variety of responsibilities to the public when it comes to public health, safety, and wellness, and how we respond collectively and individually to such events says a great deal about the nursing profession and the nurses who comprise it. 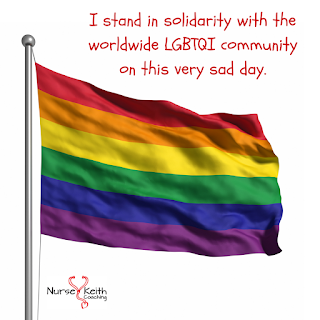 
When I first heard about the Orlando shooting, I of course thought of the injured, the dead, and their families, but I also simultaneously thought about the police officers, fire fighters, paramedics, and others who responded to the scene. First responders are called that for a reason, and I can only imagine the feelings racing through the minds of those who first walked into that bullet-riddled nightclub to witness the mass of maimed bodies scattered throughout the building.

Some of my next thoughts hoped beyond hope that the perpetrator was not Muslim, knowing that if he was it would undoubtedly lead to more anti-Muslim rhetoric and misguided retribution by politicians, the media, and the general public.

When I learned that the target had been a bar where the GLBTQ community congregated for fun, advocacy, and community building, my heart sank as I reflected on the violence and ill will that that community had already suffered over the years.

As nurses, I believe that part of our oath is to serve our communities and the well-being of others, and the knowledge of such violence, hatred, and suffering was enough to leave me speechless with anger, sadness, and bewilderment over the ugliness that can be visited upon us at any moment.


As a nurse who has worked in public health, I take my role as an advocate seriously. Just today, I called my members of Congress to urge them to do something to stem the tide of violence perpetrated using high-capacity ammunition magazines and assault rifles that are widely and easily available since the assault weapons ban reached its sunset in 2011.

Meanwhile, I've reached out to my son, who works for The Justice Resource Institute and Boston GLASS in Boston, Massachusetts, advocating for GLBTQ youth of color. I also interviewed Dr. Susan Strauss about transgender health and nurse advocacy for an episode of RNFM Radio that will air on June 22nd.

My rage and sadness run deep, as does my inability to fully comprehend how such devastating evil, violence, and ill will continue to permeate human society so deeply. Perhaps humans simply cannot escape their most base brutal nature, and our collective enlightenment (if it ever occurs) won't necessarily involve a cessation of such brutality and hatred.

Some may argue that homicides are down and the world is much safer on many levels, which may be true, but the barrage of ugliness and violence that we humans consistently bring to bear is difficult to overlook. As a nurse, I feel a desire to protect others from such horrible atrocities, but I admittedly sometimes feel powerless, even as I recommit to being an advocate for those in need of such support.


I don't write this blog post in order to offer a simple fix, and I entertain no pretensions of having the answers. While I have many more opinions about guns and gun violence, the curious rise of Donald Trump, the scourge of anti-Muslim rhetoric and the homophobia that still pervade our society, the purpose of this post is not to espouse my opinions for you, the reader.

Nurses, we need to act as advocates, educating ourselves on the issues of the day, and taking a stand wherever we choose to do so. If you support the 2nd Amendment, do so by educating others about why you think it's important and how it can be upheld responsibly and fairly. If you feel that the LGBTQ patient community deserves more dignity and respect within the healthcare industry, become a leader by educating yourself and others, and then bringing change to the institutions where you serve as a nurse.

As the most trusted professionals in the United States, we have a responsibility to bring sanity, health, wellness, and advocacy to the proverbial table. I'm galvanized by the events in Orlando and I want to make my voice heard and have an impact in the world.

Keith is co-host of RNFMRadio.com, a wildly popular nursing podcast; he also hosts The Nurse Keith Show, his own podcast focused on career advice and inspiration for nurses. Keith is also the resident nursing career expert at Nurse.com.

A widely published nurse writer, Keith is the author of "Savvy Networking For Nurses: Getting Connected and Staying Connected in the 21st Century." He has also contributed chapters to a number of books related to the nursing profession, and currently writes for MultiViews News Service, LPNtoBSNOnline.com, StaffGarden, and Working Nurse Magazine.