Reflections on Doctors Has Been Published

I am very happy to announce that a chapter which I submitted to Kaplan Publishing for inclusion in a new book of non-fiction by nurses has been included in the recently published volume, Reflections on Doctors: Nurses' Stories About Physicians and Surgeons. 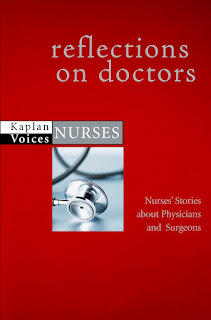 The book is the first in Kaplan's newest series, and I am honored and thrilled to have been included. I cannot reproduce my chapter here on Digital Doorway, so the only way for interested readers to actually read my submission is to buy the book or to some day check it out of a library.

A review of the book has been published on Blissful Entropy, a wonderful nursing blog.

Here is Kaplan's press release about the book:

Anyone who has been a patient or visitor to a hospital knows that the long-time image of nurses as helpful ladies in white who administer IV’s and wake patients every four hours to take their temperature, is not the role of modern-day nurses. Coming from varied educational paths and scopes of practice that place them side-by-side with doctors, nurses are no longer the “obedient handmaidens” to doctors that they once were perceived to be. If they disagree with doctors’ orders, nurses today can and do refuse them. The relationship and power dynamic between nurses and doctors has evolved with nurses now trained to ask questions and seek answers.

Through nearly two dozen provocative essays REFLECTIONS ON DOCTORS: Nurses’ Stories about Physicians and Surgeons (Kaplan Publishing; September 2008; $14.95 Paperback/$16.95 Canada), readers are taken behind the closed doors of the OR, the rapid pace of the ER and to many other venues where medical situations are exceedingly intense, and the integrity of the intertwined relationship between nurses and doctors is consistently challenged.

As REFLECTIONS ON DOCTORS’ editor Terry Ratner, RN, MFA says, “The nurses of this anthology represent a spectrum of voices and perspectives, reflecting upon their work alongside physicians. The majority of these nurses have witnessed revolutionary changes in the nurse-physician relationship over time. They are our messengers, our heroes and our scribes.”

The intimate and at times shocking stories in REFLECTIONS ON DOCTORS abound with the honesty of each writer’s respect of and concern for the nursing profession, and the care that patients receive from doctors and fellow nurses alike. For example, in her fascinating essay A Truth about Cats and Dogs, Adrienne Zurub, RN, MA, CNOR says of the competitive environment within the cardiothoracic operating rooms where she has worked, “Arrogance, entitlement, outstanding talents(nurses and surgeons), and palpable confidence dominate the entire operating room suites. A nurse pushes herself or himself through this encompassing fog of testosterone. I say testosterone because the surgeons, the ones who are in charge, are all male. To work in this environment, one has to have the personality and the chutzpah—the balls—to think quickly and react perfectly. Weakness or hesitation is normally not considered an option.”

Readers are further privileged to the gentle musings of nurses such as Keith Carlson, RN who in his essay Where the Heart Rules states, “What I have learned in partnership with these outstanding doctors is that nurses, although often undervalued in outpatient settings, can serve in proactive, clinically meaningful roles if doctors willingly and consciously choose to utilize their specific skills and knowledge base.”

Many of the essays in REFLECTIONS ON DOCTORS provide readers with clear-cut explanations of various medical terminologies, interesting history of the nursing profession and glimpses into its future. The diversity of all the essays is appealing to both new and seasoned nurses, as well as to someone simply interested in understanding the importance and ever-changing relationship between nurses and physicians. Further topping off this collection of engaging essays is a reader’s guide designed to, says Ratner, “stimulate meetings of the minds and begin crucial conversations in hopes of understanding the nurse-physician relationship.”

ABOUT THE EDITOR
Terry Ratner is a registered nurse, freelance writer and creative writing instructor. Her nursing career has spanned more than 17 years at Banner Good Samaritan Medical Center, a level-one trauma hospital in Phoenix. She has written for many publications including NurseWeek, Nursing Spectrum and John Hopkins Nursing.
Posted by Keith "Nurse Keith" Carlson, RN, BSN, NC-BC at 10/07/2008 10:11:00 AM

So when will your own book come out?

Kim from Emergiblog is right. You are a great writer. I'll check out that book sometime.

It is actually published and ready for purchase. Just follow the hyperlinked title of the book in the first paragraph of my post!

You are too kind!